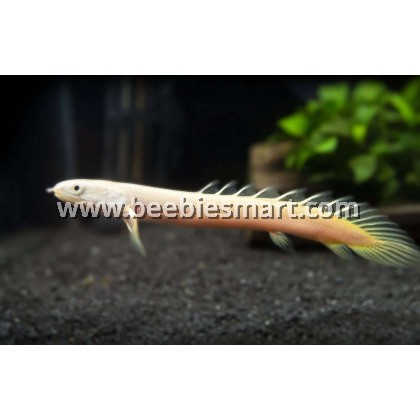 Please read before make a purchase

Size
The size shown is mostly grown/max size. The send out size/appearance might differ from the shown.

DOA Insurance
Please note that all live animal and live plant orders do not come with (Death of Arrival) DOA insurance as we cannot guarantee treatment by the post facilities or postman.

Polypterus senegalus is commonly known as the dinosaur bichir, Senegal bichir, Cuvier’s bichir, grey bichir, dragonfish, or dinosaur eel. However, the last name is actually incorrect as this bichir species is still considered a fish, despite their long body.

Dinosaur bichirs are part of the Polypterus genus, which contains 13 species in total; their genus name actually stems from “many wings” or “many fins.” Fossils from early ancestral species of the dinosaur bichir have been traced back to 200 million years ago.

Dinosaur bichirs are one of the most widespread species from Polypterus, occurring in more than 26 African countries, including the major Nile River system; these countries include Egypt, Kenya, Nigeria, and Senegal (hence their Senegal bichir common name). Here, these fish usually live in the shallows of slow-moving and tropical freshwater lakes, floodplains, and swamps. The water temperature remains between 75-82° F (24-28° C) with a fairly neutral pH range between 6.2 and 7.8. These fish tend to live in softer water.

Dinosaur bichirs often live in murky water with poor visibility. Because of this, their eyesight is not the greatest, but they’ve adapted by having a great sense of smell and are able to detect electrical currents through the water to hunt for smaller fish and other food; the size of the food does not matter too much, as long as it can fit in the bichirs’ mouth.

In the wild, the life expectancy of bichirs is unclear, though they may live up to 30 years in captivity if exceptional aquarium care and favorable water conditions are provided.

These long fish are pretty easy to identify as they quite literally look like an ancient dinosaur fish. Dinosaur bichirs are one of the smallest species of Polypterus, but can still grow up to be 20 inches (50 cm) long. They have a grey/beige body that may have random darker blotches across it. Dinosaur bichirs feature a long, serrated dorsal fin that they have the ability to fully extend or lay flush on their back. These bichirs also have two pectoral (side) fins that help them push themselves across the bottom of the aquarium where they live.

Interestingly, dinosaur bichirs have adapted the ability to breathe air and can remain out of water for some periods of time as long as they stay moist. This also means that dinosaur bichirs can actually drown if they are cut off from an oxygen supply. This ability most likely evolved to help dinosaur bichirs live in murky water with low oxygen levels.

Dinosaur bichirs also have a modified swim bladder, which helps many fish species to maintain buoyancy in the water, and have formed primitive lungs instead. This means that you’ll often witness your bichir swimming to the surface of the water to take a gulp before returning to the bottom of the tank.

These dinosaur fish also have incredibly armored skin that has actually been studied for creating better protective armor with increased mobility.

While dinosaur bichirs seem to be the most common species of bichir due to their manageable size (in comparison to other bichirs), you will most likely come across these other bichirs that could work for your tank as well: